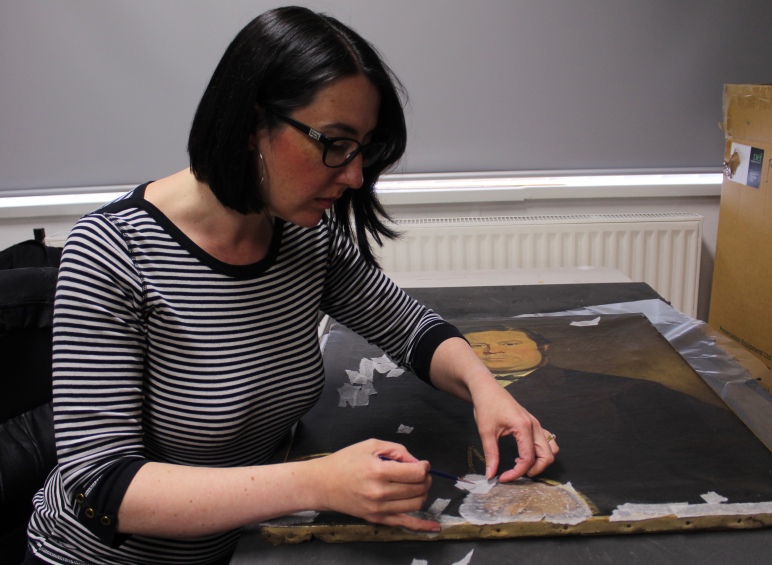 We can probably all agree that paint falling off a painting is a Bad Thing. Much of what I do for any painting that passes through my hands is to prevent it from happening by correcting canvas tension, framing it nicely and recommending where to hang it. But it still happens, and when it does it my job to try to rescue as much original material as I can and to prevent more from becoming lost. I consolidate.

There are different reasons the paint my become unstable. Chemical changes over time make paint films harden, become brittle, change colour. Sometimes there are strange interaction between layers in a painting that can cause delamination, where a top layer doesn’t adhere properly to the layer beneath, or perhaps the way the the canvas or board was prepared (or not) doesn’t help the paint to stay where it was put. Sometimes it is a problem related to the physical structure, with vibrations from travel or passing vehicles, impact (accidental or intentional), or environmental changes causing movement in the canvas or panel. Sometimes there is a disastrous event that leads to paint loss, such as a flood.

In the last couple of years I’ve worked on quite a number of works damaged by floods. These works were damaged in two separate incidents, one river-related and the other caused by an internal water leak. Easel paintings are susceptible to water damage because the materials in them are often hygroscopic (meaning they have an affinity for water and can take on and release water readily). Canvas fibres swell and contract, as they take in and lose moisture, causing the dimensions and tension to change, resulting in movement in the paint layers too. With movement in the canvas can come tearing, as the fibres break under the strain, which almost always involves some paint loss. In traditionally prepared canvas paintings the first layer applied to the canvas is called size, which is often water-soluble animal glue that slightly reduces the absorbency of the canvas and gives a good key for the next layers. On exposure to a lot of water this layer can be washed out, leaving the layers on top detached from the canvas and very vulnerable to loss.

Sometimes canvases shrink as a result of flood damage, but the paint layer still occupies the same area. This can lead to tent cracks (so called because of their resemblance to old-fashioned ridge tents) where there is no longer room for the paint to go back where it had been. Sometimes it’s possible to stretch the canvas and make room for the tented paint in a process called prestretching. The photo below is from a painting I worked on a couple of years ago that had been flood damaged, causing the bottom third of the paint to become tented in horizontal bands. Kraft paper is attached to the painting and the loom (temporary wooden stretcher) while it is wet. As the paper dries it shrinks and pulls the canvas out evenly, allowing for consolidation to be carried out under tension.

A painting that I’m working on at the moment has a lot of lifting paint, blisters and tears. As a first aid measure, another conservator applied adhesive through tissue to the flaking areas to hold the paint in place (this is called facing). The facing is useful and has done its job well, but it makes my task slightly more difficult as I can’t see exactly what I’m dealing with. So I’m painstakingly introducing adhesive with a small brush, before gently applying heat with a warm spatula to encourage the adhesive to penetrate under the paint flakes and help to get them to lie back down. The tissue and excess adhesive needs to be cleared from the surface, which then allows me to see what is going on and repeat my consolidation if necessary. When a painting is very badly damaged there is inevitably some paint loss that can be retouched at a later stage. No doubt this painting will inspire further blog posts as the treatment progresses. 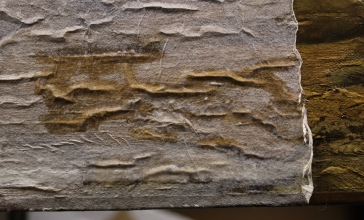 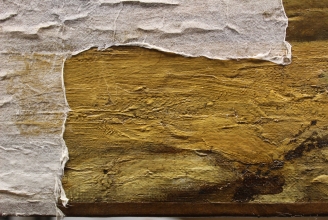 After consolidation, during removal of the facing tissue

Icon’s Paintings Group Conference last year was called Wet Paint: Interactions between water and paintings, which dealt with new water-based methods of treating paintings, but also the destructive power of water. So it’s not just me thinking about this or having to deal with more flood-damaged paintings. With the changing climate I can only imagine that the number of paintings affected by flooding in the future will increase. It makes me even more determined to find more sustainable ways of working to help reduce my impact on the planet. 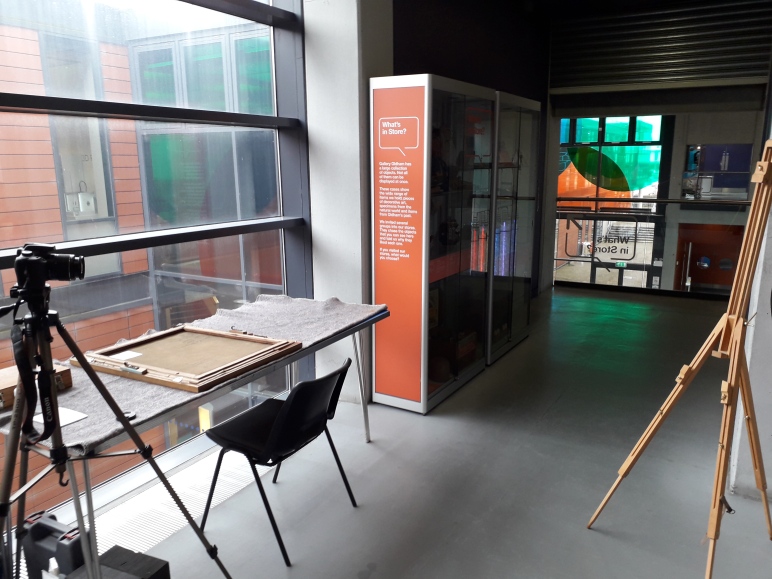 My latest project is working with Gallery Oldham to conserve paintings from their collection that were damaged in a flood. The variation in severity of damage is vast, with some paintings really badly affected by direct contact with water, while others have been damaged by the humidity. I have taken some of the larger and more badly damaged paintings into my studio to work on over the coming months. For the smaller and less badly affected ones I have been working from a pop-up studio in the gallery while it is open.

I’ve worked in my pop-up studio twice, with my next visit booked in for the beginning of November. It’s a very different way of working for me, as I’m making assessments and then doing the remedial work straightaway. So far I’ve repaired a damaged frame, surface cleaned three pictures with adjusted water, consolidated a large, lifting paint flake, re-tensioned canvases, tied in stretcher keys and lined frame rebates. I’ve come across more nailed in pictures than I’d like, but I’m replacing the nasty things with brass strips. It’s been a challenge to make sure I have all of the right kit for carrying out such diverse treatments, but the joy of going back several times is that I can always pick something up next time.

A few people have passed by while I’ve been working but not many people have come to say hello. I think in the coming visits there will be some information about what it is that I’m doing, and I’m thinking of reorienting my little space to invite more interaction with visitors, which might help people feel less like they’re interrupting. So if you’re in Oldham on a Monday come and see if I’m working. If I’m not there it’s still well worth the visit.