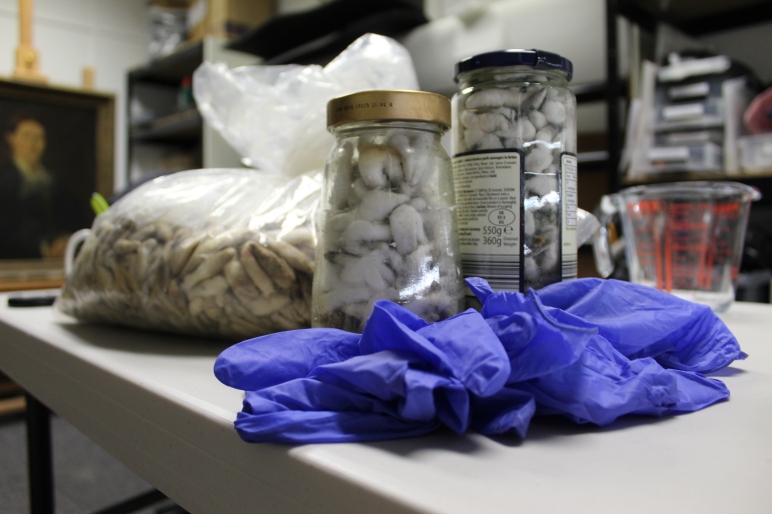 With the Extinction Rebellion happenings of the past week I have turned my thoughts to my own contributions to climate change. It’s sort of funny that I have flippantly told people that the conservation I do isn’t the “saving pandas” kind, but I’ve not really considered the footprint of my work. My whole purpose is to make things, art, last longer so that people can continue to engage with and be enriched by them in the future, which rather takes the future for granted.

At home I’ve long been a keen recycler but over about the past six months I’ve been concentrating on reducing rather than relying on recycling. It’s been quite effective to the point where my son’s school are collecting Ecobricks and we didn’t have a plastic bottle to fill for about 2 months. At work, however, it’s a different story. I make a bit of an effort to recycle boxes and I save things that I can use again- empty jars, off-cuts of materials that might be big enough to use for something else, gloves that have only been worn once- but I still create quite a lot of hard to recycle waste, particularly dirty cotton wool, nitrile gloves, parcel tape and polythene. I’m careful and responsible in how I dispose of my rubbish but is that really enough? What can I do to reduce the amount I send to landfill?

There’s a group called Sustainability in Conservation who are based in the US and have been much quicker on the uptake than me. I’ve known about them for a while but it’s only more recently that I’ve started to look at their resources for ways that I can improve. From their website I’ve found that there are schemes in the UK for recycling used gloves, so that’s one thing I can start doing. I’ll have to keep looking to find out what else can be done with my grotty swabs, or if there’s a good reusable alternative to cotton wool out there. Any suggestions would be gratefully received.

Are you doing anything to reduce waste at work?