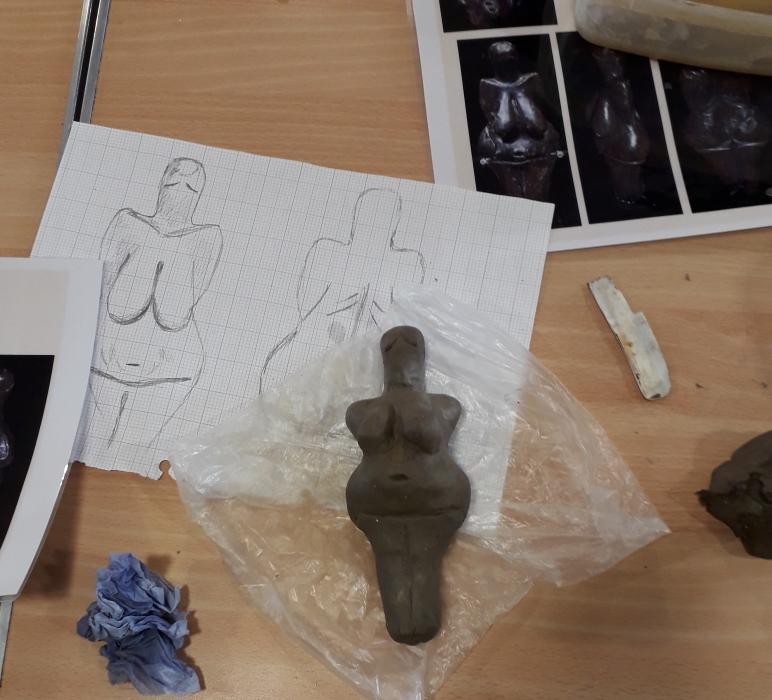 It’s the start of another year, indeed another decade. It doesn’t feel like long enough since last January and once again it’s been a hectic start, with extra work coming in that I didn’t know about a few weeks ago. This time it will mean spending some time at National Museums Liverpool to help with a glut of loans. It will be ten years since I started my conservation career there, so it will be interesting to see how much has changed. I’ll also be at Gallery Oldham fairly regularly, continuing the conservation assessments and treatments after their flood. In between all these trips out I’ll be psyching myself up for structural treatments on some of the paintings in the studio.

Away from the studio I’ve been doing some fun stuff. I spent an afternoon making a palaeolithic ‘Venus’ figurine as part of a Learning through Making session at Stockport Museum. It was a fascinating activity and appealed to my interest in materials and techniques in art, and my art history background. It was great fun smashing up bones with a stone to incorporate into the clay, especially since I spend so much time being careful not to break anything! And then contemplatively forming the clay into a female figure and reflecting on the process and what people making them 30,000 years ago might have had in mind. I’m not sure I had a great deal of insight to add to the discussion, as I am aware how much our own history and culture pervades our interpretations. I was reminded of the Van Meegeren forgeries of the 1930s, which at the time appeared so like Vermeer’s works that many people were fooled. But looking at them now, though there is a sense of stillness similar to Vermeer’s, they seem so obviously imbued with 1930s culture (particularly the heavy Marlene Dietrich eyelids) that it seems extraordinary that experts should have been taken in. Hindsight is 20/20 in the case of the Van Meegerens, but I think our 2020 vision (if you’ll excuse the terrible pun) makes it impossible for us to know for sure what the ‘Venus’ figures meant to the people who made them. What I think they do indicate is how essential the need for creative expression is, whether for spiritual reasons or aesthetic ones.