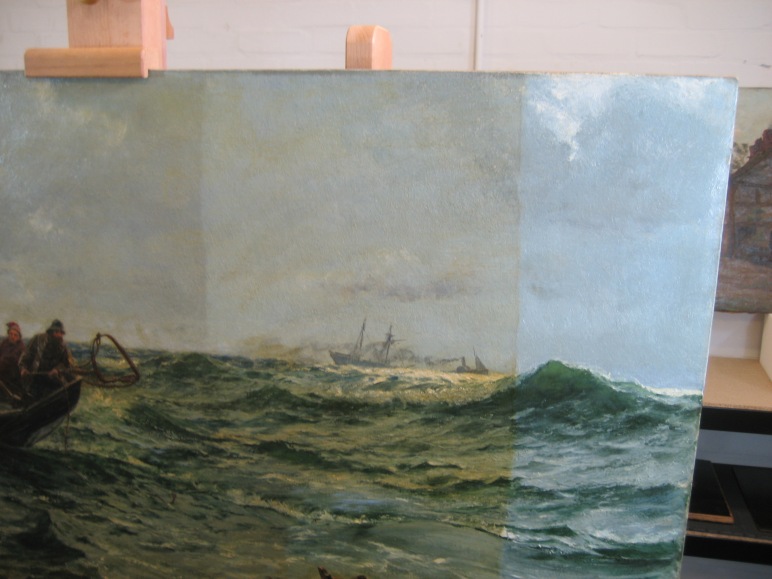 There’s been a bit of rumpus on social media this week after the Philip Mould Gallery posted a video on Twitter of a painting being cleaned. The intention of the video was to say “look at this amazing person doing something really dramatic with this filthy old painting” and the conservator carrying out the treatment is experienced and, I understand, accredited but many conservators across the world feel that the treatment as shown doesn’t accurately portray the knowledge, experience and delicacy required when attempting such a task. I don’t generally like to pass judgement on a fellow conservator’s work but the, shall we say, ‘casual’ approach of the conservator did make me wince. I don’t know what he was using, it was some kind of gel, or what safety margin tests he’d carried out, but the manner in which he was using it, allowing it to dribble down onto already cleaned areas, seemed to me to be less than ideal.

Cleaning pictures is fraught with difficulty. Modern conservators hold the principle of reversibility sacrosanct, which is great when you’re putting something on but completely redundant when you’re taking something off and therein lies a problem. The original cleaning controversy was conducted through letters to the Burlington Magazine about the conservation of paintings at the National Gallery in London. Today there is a group called ArtWatch, which likes to watch out for any painting that has been ‘over-cleaned’ and show up at conservation conferences to grill the speakers. A book on the required reading of my training course called ‘The Ravished Image’ also addresses the problem of over-cleaning. Taking away layers of varnish using solvents and other cleaning agents is a delicate task and one that should not be undertaken lightly. The only way for conservators to protect themselves from allegations of improper treatment is to treat every picture with the same standard of care and ethical consideration and to rigorously document treatments and explain in the documentation the rationale behind decisions.

In the past, and possibly still today in some practices, there was a tendency to go straight for varnish removal to solve the problem of a discoloured and obscuring surface but this is not usually done any more. It is my practice to try to remove surface coatings in layers, starting with the dust and dirt (shown in the image at the top). This allows for a more controlled treatment, often requiring less mechanical action (scrubbing) than if you’re trying to take off everything at once. It also allows you to monitor the necessity of further treatment. There have been times when I’ve expected to have to do a full varnish removal treatment to make the picture legible only to find that once the dirt has been taken off the picture looks great and doesn’t need any further treatment. On other occasions the dirt has been masking a badly degraded varnish that really needs to be remedied.

I said near the top that I don’t like to pass judgement about colleagues in the field and that is because I’m acutely aware that we are all, usually with the best of intentions and current knowledge, carrying out sometimes irreversible treatments to precious objects that may in the future be derided as ignorant, barbaric and destructive. I hope not. But as long as there is someone cleaning pictures there will be someone criticising them.